The Montana State Fire Chiefs Association in conjunction with the Montana State Volunteer Firefighters Association is pleased to announce our Montana Fire Service Leadership Training Series. These free monthly online training sessions will focus on Leadership, Recruitment and Retention and all fire service professionals are invited and welcome to participate. Please share with your colleagues. Certificates will be provided upon completion of the session.

This training is made available through funding provided by the FEMA SAFER Grant, awarded to MSFCA in 2020.

Communicating with the public is more than just reporting facts about an accident or fire. If done correctly, it becomes a critical part of ensuring community financial support for fire and life safety services.

Liz Loomis has 25 years of experience in strategic communications, earned and social media, campaigns, and government to achieve the desired outcomes for her clients. She founded Liz Loomis Public Affairs (LLPA) in 1997 to serve local governments by providing vital public services.

As a former city council member, mayor, and state representative, Loomis’s knowledge of voter opinion is actively sought after by organizations dependent on tax revenue. Her firm has helped pass hundreds of ballot measures in the past 20 years. She is a national keynote speaker on improving communications with taxpayers, how to win ballot measures, public relations, and crisis communication issues.

Every department wants more fully qualified firefighters; however, the reality is that we must develop them. Everyone must do something for the first time.
Join Chief Page to explore “out of the box” recruitment opportunities. (Pervious training hosted 2/16/2022)

Chief Joe Page started his fire service career as a volunteer for the Vista Fire Dept in South Salem, New York, back in 1983. During his 15-year with Vista, Joe advanced through the ranks, being elected Chief in his last 2-years before his job as a printed circuit board designer relocated him to New Hampshire.

In 2004 Joe was fortunate and was hired as the Training/Safety Officer for Elk Creek Fire, eventually serving as Asst Chief and then Interim Fire Chief.

In 2013 Joe accepted an Asst Fire Chief position with the Whitefish MT until 2014 when he was named Fire Chief, a position he holds today.

Joe’s fire service career spans five different departments in four different states, from all volunteers, to mostly volunteers and now a mostly career combination departments, not that he wouldn’t love to have many more volunteers. For the last few years job has also been a contract instructor for IAFC’s Recruitment and Retention Coordinator Certification course.

How To Manage The Impact Of Change

How do we as a fire service adapt to the changes in the communities and areas we serve. What are the organizational challenges and, in some cases, personal impacts that accompany change in our communities and how do we address them.

Chief Rich Cowger joined the Town of Columbus and Columbus Rural Fire District in 1993. He progressed through the department ranks, becoming Chief of the Town of Columbus in 1999 and Chief of the Rural Fire District in 2000.
Locally, Chief Cowger currently serves as the Chair of the Stillwater County LEPC, a deputy Stillwater County Fire Warden. At the State level Chief Cowger serves as the Chairman of the Montana State Fire Chiefs Association (11 years), sits on the State Wildland committee, Eastern Montana Zone Board, and is the Vice-Chair of the Northern Rockies Coordinating Group and is a member of the State 911 Committee. At the National level Chief Cowger is an adjunct member of the International Association of Fire Chiefs Wildland Fire Policy Committee and as Vice-Chair of the Volunteer and Combination Officers Section of the IAFC.
Chief Cowger recently completed his bachelor’s degree in Fire and Emergency Service Administration. He is also NWCG red-carded as a structure protection specialist, division supervisor, liaison Officer and type 3 IC, Type 2 Operations Section Chief and is currently training to be a T2 IC with a national type 2 incident management team.

Because of the exposure to trauma and occupational and relational stressors, firefighters are at higher risk of mental, emotional, and physical dangers than the general population. With this understanding, Adam Jordan and Becca Rigal hope to shed some light on the need for increasing vigilance within the fire service for programs such as Peer Support to ensure the well-being of our members.

Rebecca Rigal was born and raised in Germany. She came to the United States in 1996 and became a U.S. citizen in 2009. One of Rebecca’s highest priorities is mental health, especially the psychological and spiritual care of first responders. Shortly after she joined the Medicine Lake Volunteer Fire Department in 2016, Rebecca was tasked to research policies and procedures to form a Peer Support Team (PST). Since its implementation, PST has assisted its members with stress management, follow-ups, and interventions. As a Captain in the rural fire service, Rebecca carries the responsibility of ensuring her crew’s safety on the scene and strongly believes in addressing the subconscious embers after a bad call.

Adam Jordan is an Engineer/Medic with Great Falls Fire Rescue and has been a part of the Peer Support Team since its inception. Adam sees a great need for available resources for the members of both carrier and volunteer fire departments around the country and is dedicated to providing that assistance at GFFR. Adam is also a member of the GFFR Tech Rescue team and works as an instructor for Montana State University Fire Service Training School.

Becoming A Person Of Influence

Instructor Yanick Hicks
Yanick is a President Advisory Council and Executive Director of the John Maxwell team who is passionate about leadership coaching and development. He is certified to coach, facilitate, speak, and train individuals and groups in the areas of leadership development, personal growth, and professional skills. Mentored and trained by John Maxwell and mentors of his world-class facility, Yanick has the skills, resources, and experience to help teams improve and sustain productivity, performance, and profitability.
Working and speaking at fire organizations such as Arizona fire district association, Winslow, Lake Havasu, Timber Mesa, Kingman, Mesa, Rio Rico, Tubac, Nogales, Heber-Overgaard, Leander, etc. he provides leaders with practical tools that positively and immediately impacts their leadership styles. He is dedicated to equipping leaders with skills that can be applied in real-world situations with positive and lasting results. Yanick believes in equipping organizations with leadership skills through a values-based, people-centric, servant leadership approach.
In addition to his passion for leadership development, Yanick earned his Doctor of Pharmacy from Marshall University in Huntington, WV, and is a State of Arizona licensed pharmacist. He is also very active in coaching youth sports, traveling, and spending time with family and friends.

Chief Ray will share some of his volunteer and career fire service experience as well as his current position within the overall fire protection world. A changing political and economic world that awaits a new normal post-pandemic will provide recruitment and retention challenges that require a team of leaders to overcome. He will bring a global perspective that applies to the local communities and the State of Montana. He looks forward to the dialogue with the fire service leaders of Montana.
Chief Shane Ray, President, National Fire Sprinkler Association
Shane Ray has served for over 30 years from firefighter to fire chief, as well as Superintendent of the South Carolina Fire Academy, and later was appointed by Governor Nikki Haley as State Fire Marshal. He currently serves as President of the National Fire Sprinkler Association. Chief Ray is a graduate of Eastern Kentucky University, Harvard’s John F. Kennedy School of Government, the University of Maryland’s Leadership Development Program, and the National Fire Academy’s Executive Fire Officer Program. He spent many years in organizations such as the International Society of Fire Service Instructors and the International Association of Fire Chiefs.

The training will discuss the strategy needed to stay ahead of the challenges we are facing. The world has changed. Our volunteer and career wants, desires, and concerns have changed. What are you doing to help calm their concerns?

Chief Buckman served 35 years as fire chief for the German Township (Indiana) Volunteer Fire Department, and 15 years as director of the fire and public safety academy for the Indiana State Fire Marshal Office. He is the Director of Government and Regional Outreach for IamResponding.com. Buckman is a past president of the International Association of Fire Chiefs and a co-founder of the IAFC Volunteer and Combination Officers Section. In 1996, Fire Chief Magazine named Buckman Volunteer Fire Chief of the Year. Buckman is an accomplished photographer, a co-author of the Lesson Learned from Fire-Rescue Leaders, and the editor of the Chief Officers Desk Reference. Buckman is the owner of Wildfire Productions.

July Training - The Essentials of the Leadership Journey

July Training
The Essentials of the Leadership Journey

This training highlighted the essentials of leadership that we discover along our journeys as chief officers, officers and leaders. The backbone of the training was the eleven-part Leadership Journey course that is taught in Northern Colorado and Southern Wyoming based on the Band of Brothers series.

Instructor: Division Chief Greg Ward is the Operations Chief of the Loveland Fire Rescue Authority (LFRA) in Loveland Colorado. Greg has served the Loveland community for the past twenty-six years and has a total of thirty-four years in the fire service, serving with the Berthoud Fire District, United Stated Air Force Academy Fire Department and Black Forest Fire Rescue District prior to LFRA. Greg serves as the president of the Colorado Governor’s Fire Training and Certification Board, the coordinator for the Colorado Division of Fire Prevention and Control’s Fire Officer II program and a member of the Aims Community College Fire Science Advisory Board. He is proud to be a third-generation firefighter and chief officer.

Selecting a new Fire Chief is a difficult challenge – whether it is in the volunteer fire service or the career service.  Firefighters say they want leadership and are quick to judge leaders through the prism of their own experiences, whether positive or negative.  During this presentation, we explored different methods for selecting a new Fire Chief (including doing away with elections) as well as how career departments might consider including personnel in the selection process. 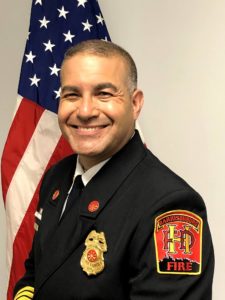 Instructor Matthew Tobia is the Fire Chief with the City of Harrisonburg (VA) Fire Department and is a 33-year student of emergency services. He holds a Bachelor of Science degree from the University of Maryland and is a graduate of the Executive Fire Officer program at the National Fire Academy. Matt has served as a member of the Editorial Board for Fire-Rescue Magazine and has authored over 120 articles.  He is also the former chair of the IAFC’s Safety, Health and Survival Section, holds the Chief Fire Officer credential, and is a member of the Institute of Fire Engineers.  Prior to Harrisonburg, Chief Tobia spent 23 years with the Anne Arundel County (MD) Fire Department and four years with Loudoun County (VA) Fire Rescue.  Matt began volunteering in south-central Pennsylvania in 1987 and is active with the National Fallen Firefighters Foundation (NFFF) and the Mid Atlantic Burn Camp for Children.

May Training - Establishing Expectations: How to Improve Member Involvement and Performance

May Training
Establishing Expectations: How to Improve Member Involvement and Performance

March Training - The Truth behind Recruiting and Retaining Volunteer Firefighters

March Training
The Truth behind Recruiting and Retaining Volunteer Firefighters

This training session focused on identifying why members leave organizations and how to attract new members.